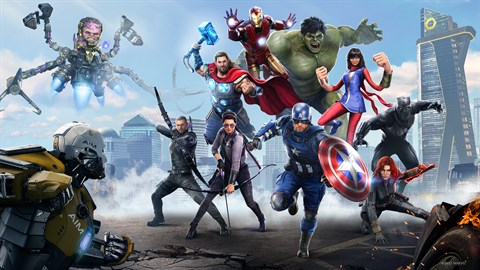 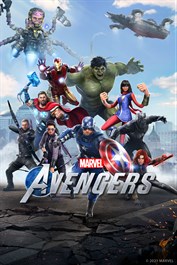 Marvel’s Avengers is an epic, third-person, action-adventure game that combines an original, cinematic story with single-player and co-operative gameplay*. Take the essential Super Hero gaming experience to another level! Marvel's Avengers will be available for next-gen consoles at no extra cost.* This version will boast a wide spectrum of improvements to visuals and speed, and will be backwards compatible in single and multiplayer. Marvel's Avengers has a beautiful world filled with exquisite detail, and with improved Heroics, destruction, graphical fidelity, and framerate versus previous gen, you won't be missing any of it. Get right into the action with fast loading times and be blown away by the striking detail of enhanced destructive visuals that make Heroics feel truly in your hands. Marvel's Avengers will support save file transfer and cross-gen play so you can pick up right where you left off and continue fighting AIM with your favorite Super Hero squad. We're excited to herald in the next generation of consoles on Marvel's Avengers! Marvel’s Avengers leverages the Smart Delivery technology - buy the game once and play it on either Xbox One or on Xbox Series X|S. Marvel's Avengers on Xbox Series X|S is available now!*** *One-time online access required for single-player campaign; online access required for multiplayer and to download post-launch content. Free Square Enix Members account required. Platform-specific online subscription fee may be required. *Upgrading from the disk version will require the next-gen version of the same console with a disk drive. **Credits that you purchase are useable on Xbox Series X|S Console version of Marvel’s Avengers. Please be aware that the Credit that you own is synced with your Microsoft account, and the wallet will be shared through both platforms.