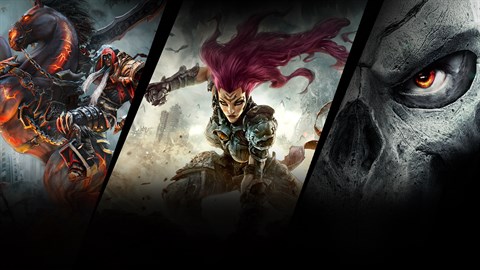 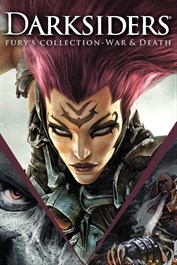 • If you have purchased the Darksiders 3 Blades & Whips Edition in order to play this content, please note it will only become playable on the 26th November In celebration of the announcement of Darksiders III, Darksiders: Fury's Collection - War and Death presents Darksiders Warmastered Edition and Darksiders II Deathinitive Edition in one package at one great value. The perfect compilation for longtime fans of the franchise and players new to Darksiders, players will take on the role of War - the first, most powerful and most eratic Horseman of the Apocalypse and Death, the most feared and legendary of the Horsemen. Darksiders Warmastered - War's Redemption: Deceived by the forces of evil into prematurely bringing about the end of the world, War – the first Horseman of the Apocalypse – stands accused of breaking the sacred law by inciting a war between Heaven and Hell. In the slaughter that ensued, the demonic forces defeated the heavenly hosts and laid claim to the Earth. Brought before the sacred Charred Council, War is indicted for his crimes and stripped of his powers. Dishonored and facing his own death, War is given the opportunity to return to Earth to search for the truth and punish those responsible. Hunted by a vengeful group of Angels, War must take on the forces of Hell, forge uneasy alliances with the very demons he hunts, and journey across the ravaged remains of the Earth on his quest for vengeance and vindication. Remaster Features: - Native 1080p rendering resolution - Doubled all the texture resolutions - Rendering improvements and rework - Better shadow rendering quality - Post processing effects - 60 FPS gameplay Darksiders 2 Deathinitive Edition- Death's Revenge Become the terrifying force which everything fears but nothing can escape. Awakened by the End of Days, Death, the most feared of the legendary Four Horsemen embarks on a quest to redeem his brother's name. Along the way, the Horseman discovers that an ancient grudge may threaten all of Creation. Death lives! Deathinitive Edition Features: - Darksiders 2 with all DLC included and integrated into the game which offers a total playtime of more than 30 hours - Reworked and tuned game balancing and loot distribution - Improved Graphic Render Engine for higher visual quality especially in terms of lighting and shadows - Improved and reworked level, character and environment graphics Features: Play two for the Four Horsemen of the Apocalypse - Death and War - and come to understand the power of they hold and the ravages of the Apocalypse and its aftermath on planet Earth. Epic Universe: Unlike anything the player has seen before, delivered in the unique style of Comic legend Joe Madureira. Player Choice & Customization: Customize your experience with varied armor sets, weapons, and Skill Trees allowing players to create their own Death. Replay-ability: Explore a vast open world, complete dozens of side quests and customize your Death with a full leveling system, Skill Trees and endless equipment combinations. Traversal: Death is a nimble and agile character capable of incredible acrobatic feats allowing the player to explore the world like never before.