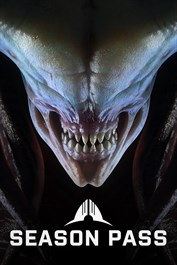 TEEN
For ages 13 and up, Blood, Violence, Language

The Phoenix Point Season Pass includes new campaign expansions, bundled at a discount. Experience all-new gameplay modes, mysterious new enemies, powerful new weapons, and tons of additional content for Phoenix Point when it releases: *DLC 1 - Blood and Titanium: Expand the power and versatility of Phoenix Point operatives with cybernetic augmentations. Unlock new abilities for your soldiers, new research projects, and new approaches to tactical combat. But beware: enemies will bring cybernetics to bear against your team, too. *DLC 2 - Legacy of the Ancients delves into the secrets of the Antediluvian Civilization that predated modern humans on Earth. Explore ancient ruins for precursor knowledge, and use it to unlock a whole new line of Phoenix Point weapons and technologies. But beware: the Ancients left powerful guardians to watch over their secrets; you won't be the only one seeking to control this ancient knowledge. New rivals will rise up as the legacy of the ancients is revealed to humanity. *DLC 3 - Festering Skies: Take the fight to the air! Festering Skies features a new interception mode, new missions, a new mission type, an original campaign story, and much more. *DLC 4 - Corrupted Horizons: A new deadly strain of the Pandoravirus appears that saps the will from every being it touches! This is a deadly threat to Phoenix, but can they make use of it against the Pandorans, as well? New enemies, a new soldier type, and new campaign missions. *DLC 5 - Chaos Engines: Get behind the wheel of new vehicles, customize your ride, and blast through an all-new mini-campaign in this exciting DLC pack!