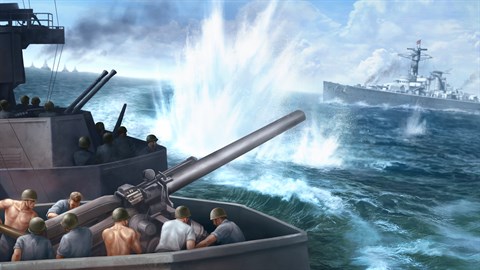 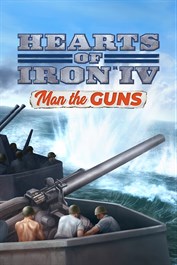 TEEN
Violence, Blood, Use of Tobacco

Control the Seas in Hearts of Iron IV: Man the Guns From the convoy attacks in the Battle of the Atlantic to the fierce carrier battles on the Pacific front, the Second World War saw naval innovation in both tactics and technology. The war at sea takes center stage in Hearts of Iron IV: Man the Guns, a new expansion to Paradox Development Studio’s popular strategy wargame. Design your own ships and refit older models. Alter your convoy routes to avoid hungry wolf packs. Embrace or circumvent naval treaties and deal with the diplomatic consequences. Man the Guns also introduces new alternate history paths for the major democracies of the war and gives the freedom loving nations of the world more freedom to act before the war forces their hand. Features of Man the Guns include: New Alternate American History: Use the American Congress to push for reform, at the risk of plunging the nation into another civil war. New Alternate British History: Push for early decolonization of the British Empire or restore the ancient privileges of the monarchy. Ship Design: Research new components and refit older vessels to take advantage of new knowledge. Outfit your submarines with snorkels or improved stealth. Admiral Traits and Skills: Tailor and level up your Admirals with new traits and skills. Governments in Exile: Welcome a government in exile to your democracy, boosting their legitimacy in return for more manpower and elite troops fighting to free their homeland. Other National Focuses: New national focuses for The Netherlands and Mexico. Naval Mines: Protect your coasts from invasion or assault with anti-ship mines, or clear a path through enemy mines before you make the big push. Shipping Route Controls: Plot new routes for your shipping and navies by marking areas you want to avoid. Naval Treaties: Struggle to keep the peace by following internationally agreed upon rules, or creatively defy the world consensus by exceeding your limits. Amphibious Landing Vehicles: Add power to your beach landing by researching and producing specialized combat vehicles for your marines. New Music: Original music composed specifically for the Man the Guns expansion.