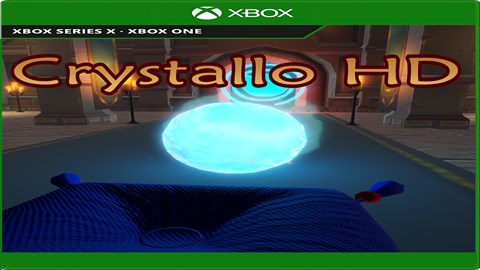 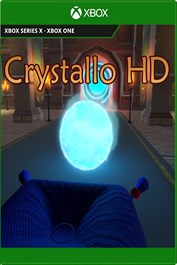 Crystallo HD is a Roll-A-Ball Adventure title in which you guide a sphere called Orbart. Your objective is to collect the key at the end of each level to advance through the game. Once you are at the last level (castle), your objective is to inform the kights of the wizard's plan to kidnap the princess. In each level, you can collide with certain objects like skeletons, barrels, and coins to increase your score. Watch out for spike traps and lava as they will harm Orbart and increase your death counter. Each death will result in lost time as the countdown timer will not stop until it reaches 0. So, when you roll around to advance in each level try to avoid the traps that the wizard has set up for you. In each level, you will see checkpoint pillows placed that you can enter to save where Orbart can respawn at when you hit a trap. By doing so, it will make it to where you don't respawn back at the beginning of each level. The game starts with all levels locked except the first and credits scenes. As you progress and collect the keys at the end of each level, you unlock the next level to tackle. Once you unlock each level, the game will save the progress to allow you to select that level to replay at any given time. You have access to a settings menu in which you can adjust your screen resolution, the quality of the game if you want to be full screen or not, adjustments to the music or fx, and a mouse sensitivity slider to allow you to set how much speed is given when rotating the camera. We made this game as a school project while we were in college at the Art Institute of Pittsburgh Online Division. We then updated the game to meet the requirements for commercial use. Crystallo HD works with the XboxOne Controller to move around the game world. Crystallo is easy to grasp as you begin playing out the first level with the tutorial text that appears in certain parts. They explain how to move, how to rotate the camera and other mechanics that will help you in the game. The HD version also contains shaders like Orbart engulfing in flames when you hit the lava to add interest when playing the game. For casual players, the game will be easy for them to get into as they get comfortable with the mechanics. For advanced players, there are hidden areas in certain levels that will allow you to progress further into the game. Just listen for audio queues as you progress in each level. The secret areas are meant to help players as you guess which portal is correct to discover the hidden pathways that will take you further into the game without having to play out each level. Once you win the game, you can see your total score and deaths to see if you can beat that score when you play out the game again. You also unlock hard mode once you beat the game that will contain more traps, fewer coins to collect, and fewer checkpoints to save your progress. Can you rescue the princess?