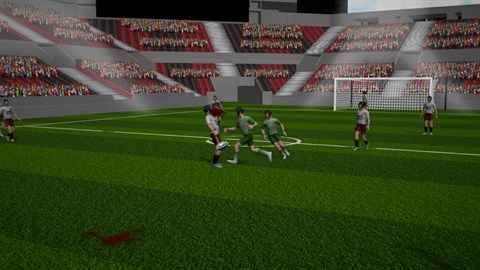 Blood Sport is an explosive combination of rugby, football and fighting! Battle against your rivals in each match, win either by goals scored or by destroying the entire enemy team! Can you make it to the top of the Blood Sports league mode? Feel the excitement and pain of the most brutal game you've played. Collect the glowing coloured cubes on the pitch to effect the game. Want to run faster than your opponent, freeze the entire opposition team or increase your health? Just watch out for the instant knockout modifier! **BLOOD SPORTS LEAGUE** Feel the excitement as you battle your way to the top of the Blood Sports league **NO RULES GAME PLAY** Grab any tools at your disposal to win, make good use of the pitch littered with weapons **QUICK MATCH MODE** Choose your team of competitors and jump straight into a no holds barred match **TWO PLAYER MODE** Play against your friend for the ultimate bragging rights **GET CLOSER TO THE ACTION** Multiple camera angles let you see the brutal action up close