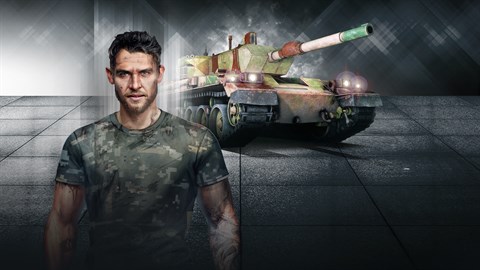 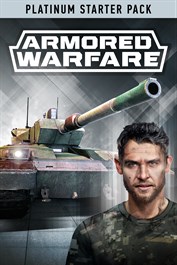 Armored Warfare, now available on the Xbox, is the future of modern tank shooters! Take control of cutting-edge tanks and join your friends in completing co-op missions, compete with rival teams in PvP mode, or experience the real tank action in the Global Operations – an explosive mix of competitive and cooperative play empowered by large maps with respawn zones, surveillance drones, AI support, airstrikes, and much more. This high-tier Starter Pack offers a large number of progression boosters of the best quality available as well as one of the most powerful MBTs of its tier. It contains: - Challenger 1 Falcon Tier 8 Premium Main Battle Tank - Commander Ulysses Strom - 15 Platinum Loot Crates - 30 days of Premium Time - 15 Platinum Battlefield Glory Boost Tokens - 15 Platinum Armored Warfare Boost Tokens - 30 Platinum Insignia Tokens of all 5 types We’ve also prepared a free gift for you – the exclusive LAV-150 90 Exterminator Tier 3 Tank Destroyer! Notable edition features: The Challenger 1 Falcon is a British and Jordanian Tier 8 Premium Main Battle Tank. The best word to characterize this lumbering behemoth in the game is “tough” – its excellent hull armor shrugs off most shells while the damage its low profile turret takes when it is reduced by 90% thanks to the fact the crew is not located directly in it. Despite being generally very slow and sluggish, the Challenger 1 Falcon can take tremendous punishment and is ideal for the players who prefer the British Main Battle Tank play style. Ulysses Strom is an exclusive commander that is capable of significantly boosting your Experience income and any vehicle’s crew performance. Born in London in a mixed Swedish-British family, Strom is a man of honor and is one of the bravest men to have ever served in corporate military forces, inspiring the troops under him with his excellent leadership skills. The LAV-150 90 Exterminator is an ideal starting Premium vehicle for every mercenary. Its four-wheel chassis makes it very mobile but where it really shines is when sniping at long distances thanks to its unusually powerful weapon for its Tier. The 90mm gun allows the LAV-150 to knock out a wide variety of targets – including tanks. It comes with unique “Xbox” camouflage. The LAV-150 90 Exterminator is a free Starter Pack gift! Premium Time increases your account’s progression rate. It can be found and activated from the Inventory screen in the in-game Garage interface. Loot Crates contain in-game progression boosts, Premium Time and other goodies. A loot crate must be opened within the game client. Boost Tokens are boosters that improve your progression speed for 12 hours. Two boost tokens can be active at the same time. Insignia Tokens are boosters that improve your progression speed for one battle. They come in five varieties, each improving a specific progression aspect: Experience, Commander Experience, Crew Experience, Reputation and Credits.