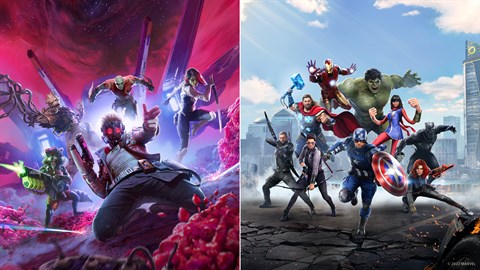 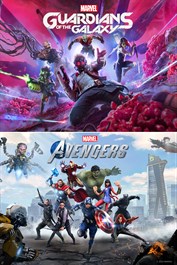 MARVEL'S GUARDIANS OF THE GALAXY: Fire up a wild ride across the cosmos with a fresh take on Marvel’s Guardians of the Galaxy. In this third-person action-adventure game, you are Star-Lord, and thanks to your bold yet questionable leadership, you have persuaded an oddball crew of unlikely heroes to join you. Some jerk (surely not you) has set off a chain of catastrophic events, and only you can hold the unpredictable Guardians together long enough to fight off total interplanetary meltdown. Use Element Blasters, tag-team beat downs, jet boot-powered dropkicks, nothing’s off-limits. If you think it’s all going to plan, you’re in for a world of surprises, with the consequences of your actions guaranteed to keep the Guardians on their toes. In this original Marvel’s Guardians of the Galaxy story, you’ll cross paths with powerful new beings and unique takes on iconic characters, all caught in a struggle for the galaxy’s fate. It’s time to show the universe what you’re made of. You got this. Probably. MARVEL'S AVENGERS: Marvel’s Avengers is an epic third-person Super Hero game that combines an original, cinematic story with single-player and co-operative multiplayer gameplay for the essential Super Hero gaming experience. The world of Marvel’s Avengers continues to expand with new Game Modes, Events, Operations, and Expansions that fill out the fabric of this original universe by diving into more than 25 hours of single-player campaign content in an ongoing original narrative. Start in the Reassemble Campaign, following Kamala Khan on her journey to reunite the Avengers against the rising global threat of AIM. Continue the exciting story in Operation: Taking AIM, where you’ll meet Kate Bishop and uncover AIM’s top-secret project that has cataclysmic implications. Follow the time-travelling trail in Operation: Future Imperfect as Hawkeye and scour the Wasteland of future Earth looking for a way to change the timeline. And now, jump into the War for Wakanda Expansion with King T’Challa, the Black Panther, and travel to the -advanced nation of Wakanda under siege by Klaw and AIM. With 9 playable Heroes at your fingertips, you can jump right into the Super Hero action of your dreams.