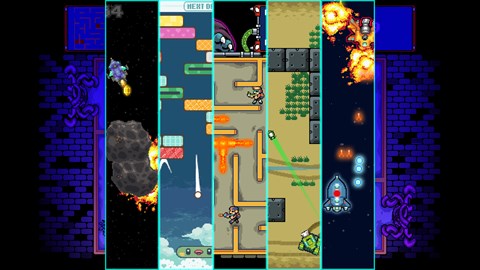 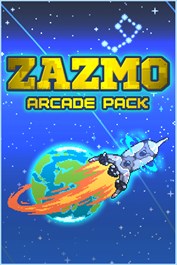 The Zazmo Arcade Pack (ZAP) is a collection of co-op, single player and competitive games inspired by arcade games we love. We took a few of our favorites and put the Donley Time Foundation spin on them. Five arcade games with co-op, single player and some with head to head (see list below) 1. Tank Wars – Two tanks versus each other or the world! Besides head to head play we added a co-op mode where you and a friend battle endless hordes of tanks. You can even revive a fallen buddy! We have multiple maps and game modes too. Of course, we also have ricochet bullets and guided shots as options for players. 2. Mazard – Two space men trapped in the maze of the space wizard. You battle aliens who can turn invisible. Thankfully you have a radar to tell you where they are. Don’t stand in place too long or Mazard will drop a flame bomb to flush you out. You can also revive a friend if he falls. 3. Breakdown – Classic block breaking gameplay. We have single player and co-op modes as well as a head to head option to challenge your friends. 4. Last Stand – You and a friend guard a pile of power crystals. You have unlimited lives but if the aliens steal all your crystals, you lose. 5. Rob’s Adventure – A shooter adventure with you and a pal flying through space. Battle alien armadas and bosses and yes, you can revive a fallen comrade here too! So yep we have single player but we think ZAP shines with a friend or in a group. Give it a try and thank you for your support!