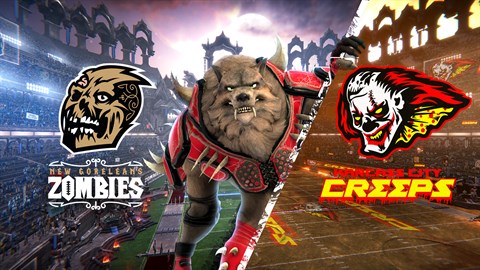 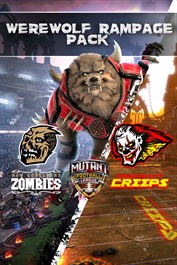 PEGI 18
For ages 18 and over, Extreme Violence, Strong Language

Do you like big, friendly, furry animals? Well this is the wrong add-on for you! With the Werewolf Rampage pack, werewolves with a lust for blood jump into the action and eviscerate the competition! This pack includes: * Rampaging Werewolf Species – Unleash the hounds! Werewolves have awesome hurdling abilities and make for great linebashers, safeties and running backs. * Karcass City Creeps Team & Arena – One of the league’s oldest franchises with an explosive offense led by their young quarterback, Hatrick McGnomes. Includes “Arrow in your head” home stadium. * New Gorleans Zombies Team & Arena – Quarterback Drew Sleaze leads a Zombie offense with the league’s most punishing running attack. Includes “Terror Dome” home stadium. * 2 New Dirty Tricks – “Sticky Ball” puts an elastic substance on the ball making it impossible to hand off or pass and “Murder Ball” is a ball covered in blades that kills all defenders in the path of the throw. This content requires the base game Mutant Football League in order to play.