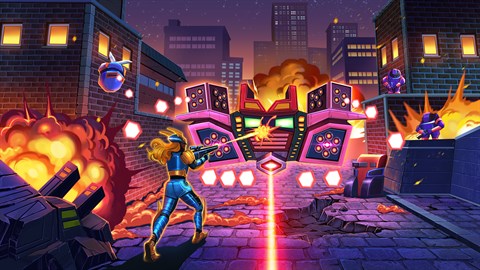 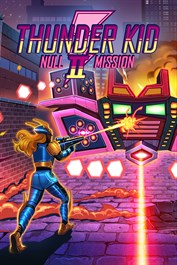 Low-poly run ‘n’ gun action returns for another explosive mission! The Robot Empire is back, and this time, they're kidnapping all the humans! Take the role of Thunder Kid once again, rescue the hostages and track down the enemy's mysterious new leader before it's too late! Take down enemy bots and massive enemies in a unique blend of retro style that can be enjoyed by casual players and speedrunners alike. Like its predecessor, Thunder Kid II: Null Mission is a low-poly 3D run ‘n’ gun action game controlled from behind the main character, shifting the perspective of genre classics and adding bullet hell elements while retaining its hallmark features. You’ll have to run, jump and shoot your way across colorful and varied 3D environments, from caves and swamps to cityscapes and even the skies, all set to an energizing chiptune soundtrack!