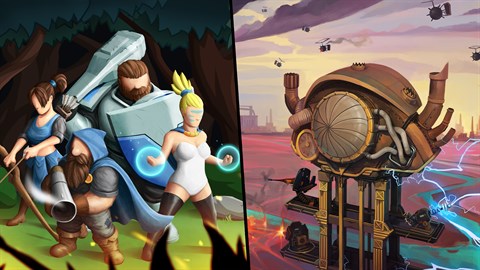 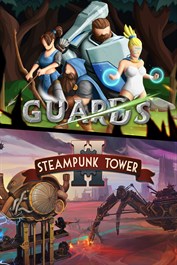 STEAMPUNK TOWER 2 Steampunk Tower 2 is a unique tower defense game set in the alternative Steampunk universe. There is a dragged-out world war with the enemy never seen before. Lord Bingham is coming back to the world arena and he needs a skilled commander. There is a secret base hidden in the mountains of Spain, with ginormous aircraft Carrier transporting the Battle Tower under your authority and also a team of specialists who execute special assignments. Can’t Steampunk be without trains?! GUARDS Play by the 4-heroes team. Defend against the hordes of monsters, plan your moves, improve your abilities. Defeat all the enemies on each level and join the deadly fight with the Boss ! The main feature of the game is a unique turn-based battle system. You command a team of 4 heroes, 3 of which are fighting on the front line, while the 4th is recovering health behind his team-mates. To make a move you need to change positions of any two heroes. If the hero moves from the back line to the front, he uses superattack. For example, the knight is thrilling the land, stunning all the enemies on the line, while the huntress is charging a bow with energy, simultaneously firing arrows at all the enemies. --- Parts of this bundle might require manual installation (manage Games and apps).