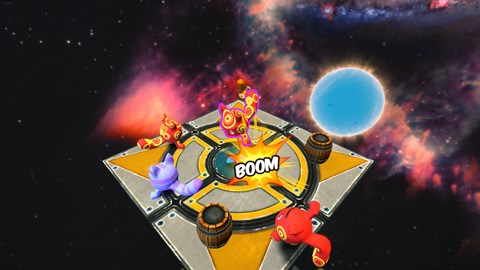 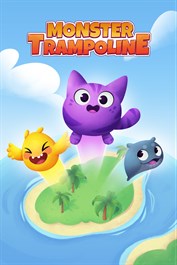 The monsters are having a party, and they love playing on the trampoline! Monster Trampoline is a local multiplayer game for 1-4 players, suitable for the entire family. Drop monsters onto other monsters to try and knock them out of the ring without having your monster fall off. Transform your monsters into stronger monsters using Star Points and use their special powers to dominate the arena. Target the explosive barrels to really send the other monsters flying! Time the power bar to adjust the force with which you hit the other monsters. Choose from 3 different levels: jumping from point to point in space, down on a tropical island with sparkling blue water, or on a pirate ship surrounded by sharks. Battle it out with up to 4 human players, or against up to 3 computer players. Choose between 2 game modes: Turn-based (normal mode) or simultaneous action (Oni mode). Choose between 2 game difficulties: easy or normal. Game play is fully customizable. Adjust the arena bounciness, number of rounds, or barrel spawn rate.