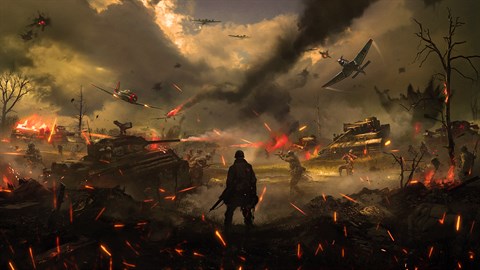 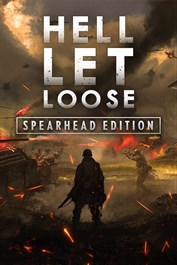 Join the ever-expanding experience of Hell Let Loose - a hardcore World War Two first person shooter with epic battles of 100 players with infantry, tanks, artillery, a dynamically shifting front line and a unique resource based RTS-inspired meta-game. Fight in the most iconic battles of the Western Front, including Carentan, Omaha Beach and Foy and more. This is combat at a whole new scale.... with lumbering tanks dominating the battlefield, crucial supply chains fuelling the frontlines, you are a cog in the machine of colossal, combined arms warfare. Hell Let Loose puts you in the chaos of war, complete with deep player-controlled vehicles, a dynamically evolving front line, and crucial unit-focused gameplay that commands the tide of battle. The Spearhead Edition not only has the base game, but also unlocks access to join the Iron Vanguard. Take to the front lines with an array of unique uniforms. Roll up your sleeves and get stuck into the thick of it with the German forces or take to the US tanks and show off the “Hell on Wheels” jacket! Iron Vanguard pack contains: German Forces – "Rolled sleeves" uniforms for 11 classes. US Forces - “Hell on Wheels” jacket for Tank Commander’s and Tank Crew