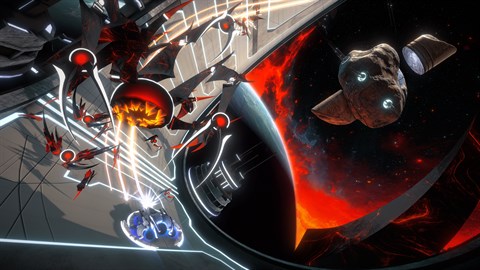 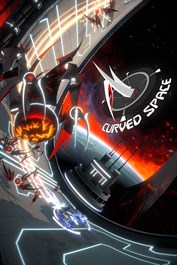 Only By Midnight Ltd. • Music • Shooter

PEGI 7
For ages 7 and over, Fear, Mild Violence

Curved Space is an intense arcade shooter about battling cosmic energy spiders across warped, physics-defying battlefields. Space stations and asteroids curve and loop around themselves. Up? Down? Who needs those when you’ve got a spaceship, guns and swarms of bugs to blast? Curved Space takes the classic twin-stick shooter formula and plunges it into the weirdest reaches of space. Battle giant enemy spiders across curved landscapes where your bullets hug the terrain while the horizon drops sharply out of sight. Inspired by arcade classics, players will have to hunt for weapon power-ups and upgrades while dodging enemy fire, blasting interdimensional bugs and wrangling some enormous boss monsters. Simple to learn as you fight your way through the branching story-driven campaign, but tough to master as you chase high scores in Survival mode. Three modes of gameplay and replayability! Story Mode: Step into the void and guide a multidimensionally jinxed energy-miner/spider-hunter through a multiverse of misfortune. Battle monstrous cosmic monsters and choose which story time-stream to follow as reality splinters. Survival Mode: Think you know your way around an energy tether? Prove it. Pick an arena and hang on to the bitter end against randomly generated and increasingly deadly waves of alien arachnids. Daily Run: Tackle a fixed survival match every day, the same waves and challenges face every player. With lady luck on vacation, skill alone will carry you to fame, glory and top of the leaderboards.