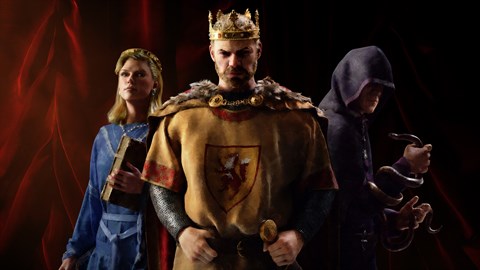 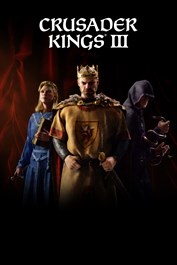 Pre-order Bonus, Garments of the Holy Roman Empire Immerse yourself in the Holy Roman Empire with a collection of outfits for commoners, warriors and rulers of Central Europe. Crusader Kings III is the latest version of Paradox Development Studio’s beloved role-playing Grand Strategy Game of medieval conquest and royal court intrigue. Lead one of hundreds of noble or royal families through the Middle Ages, as you acquire power and prestige across the generations. Will you be a wise and pious king or a violent scheming duchess? Perhaps a learned caliph or gentle warchief. Guide your character through a life of excitement, making sure that there is an heir to carry on the family legacy, building an empire whose glory will echo through history. EXPLORE HISTORY A map that stretches from Iceland to India, from the Arctic Circle to Central Africa. Guide a historical dynasty through the centuries. Gather new lands and titles to cement your legacy. Knights, peasant revolts, pilgrimages, Viking raiders... experience the drama and pageantry of the Middle Ages. Be a faithful adherent of your religion, embrace heresy, or start your own faith on the wreckage of failed belief systems. DEVELOP CHARACTER Adopt one of five different lifestyles, perfecting your skills in military strategy or kingdom management. Character traits guide your actions and affect outcomes. Characters that act against their nature develop stress that could bring a new host of troubles. Raise your heirs to be worthy successors, training them yourself, or giving them as ward to a trusted friend or ally. Unworthy heirs are risky, unless you can find a way to get rid of them - legally or otherwise. Choose to use fear as a weapon, using your dreadful reputation to intimidate vassals and family. WAGE WAR Supplement your royal levies with professional infantry, cavalry, and siege weapons, as well as exotic regional units. Research new technologies to increase the wealth and military might of your realm. Hire mercenaries and Holy Orders for your major wars. PLAN INTRIGUES Spy on your court to discover plots against your dynasty and your rule. Find allies in the courts of rivals you are targeting for schemes. Seduce other characters for love or political power. Do favors for your subjects so they will owe you loyalty - or support for your plots against your enemies.