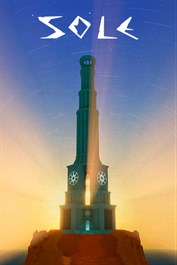 Uncover the secrets of a world lost in shadow . . . Sole is a surreal adventure game where you play as the only source of light in a world shrouded in darkness. Wander through uninhabited environments, painting the land with light as you uncover its mysterious past. Explore the remnants of great cities and discover the history of an ancient civilization on your journey to restore life to an abandoned world. - TRANSFORM THE WORLD Paint the land with light and leave a permanent trail of illumination wherever you explore. Grow grass, bloom trees, and reveal murals of light as you restore life across the land. - UNCOVER THE PAST An emotionally engaging non-verbal story tells the history of an abandoned world through 5 meticulously designed environments. Collect an alphabet of ancient glyphs to reveal the secrets of a lost history. - GET LOST IN AN AESTHETIC EXPERIENCE Heavily stylized watercolor visuals create a hypnotic dreamlike aesthetic while a haunting original orchestral soundtrack builds a rich soundscape of ethereal tones and somber melodies.