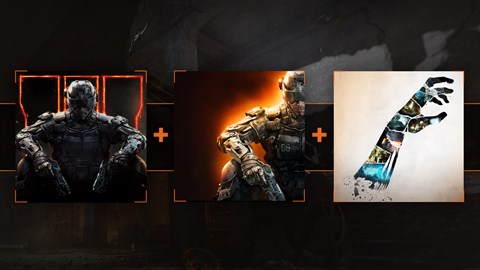 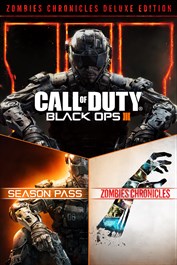 Now with more content than ever before. Call of Duty®: Black Ops III Zombies Chronicles Deluxe includes the full base game, Season Pass, Zombies Chronicles & additional bonus digital content including: The Giant Bonus Map: Zombies returns in all of its undead glory with "The Giant". Re-live the chaos of Treyarch's classic "Der Riese" Zombies map, picking up the Zombies story with Dempsey, Nikolai, Richtofen, and Takeo where Origins left off. 3 Personalization Packs: Fan favorite Cyborg & Weaponized 115 packs along with a new Black Ops 3 pack. Each pack comes with a weapon camo, reticles, and calling card. The Zombies Chronicles content expansion which delivers 8 remastered classic maps from Call of Duty®: World at War, Call of Duty®: Black Ops and Call of Duty®: Black Ops II. © 2008 - 2017 Activision Publishing, Inc. ACTIVISION, CALL OF DUTY, CALL OF DUTY BLACK OPS, and stylized roman numerals II and III are trademarks of Activision Publishing, Inc. DLC content in the Season Pass may be sold separately. All Season Pass content has been released. If you purchase the Season Pass, do not also purchase the standalone map packs, as you will be charged for them. Season Pass and DLC content may not be available in all territories. Pricing may vary by platform.