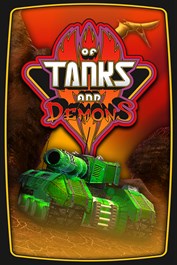 Of Tanks and Demons III

PEGI 7
For ages 7 and up, Mild Violence

Of Tanks and Demons III — it's the new game with the vibe of classic arcades of 80's. Collect photons, shoot demons, buy new tanks and improve them. Don't rely on brute force solely! Sometimes you need to outsmart your enemy, not just outgun them with bullets. In the end of 2020 the worst thing in history of mankind has happened — gates of Hell has opened and let the hellish hordes of demons run wildly on Earth. For the hellspawns the human weapons was not much of a threat, just like peashooter versus elephant. It looked like the human race has no hope left for survival. But in the darkest hour the glimpse of hope, the ray of light appeared, and so it happened: the group of american scientists with Dr. Gusev as their lead scientist invented the special photon cannons, that can easily tear demon flesh apart. New photon weapons were installed on advanced tank models, created by Greenrunner Industries corporation. But there was a problem with tanks — they can be operated only by those who created it. These people were genius engineers of their time, but when they opposed the government they were imprisoned as war criminals. But facing the total destruction of all life on Earth the government decided to make a compromise. Now there is only one way for Travis Greenrunner and his people to get their freedom back — to drive away the demon scum to the place they crawled out from!