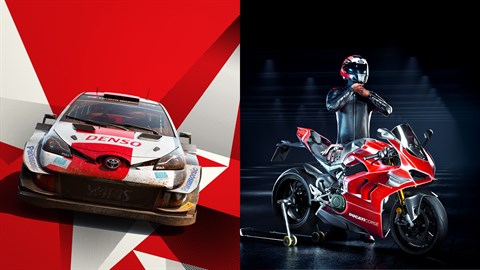 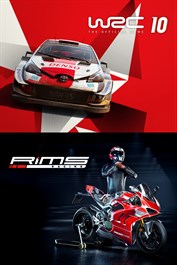 Xbox One game playable on Xbox Series X|S. A version optimized for Xbox Series X|S is available separately. If you are passionate about speed, mechanics, rallying and motorcycle racing, you can find all official WRC content, sportbikes and the world's most iconic circuits in WRC 10 and RiMS Racing. Developed using the KT Engine, which was designed specifically for racing simulation, both WRC 10 and RiMS Racing provide the most complete rally and motorcycle racing experiences currently available. WRC 10 offers a unique Anniversary Edition, bursting with new features and driving thrills. Relive the most intense moments of the championship, from 1973 to the present day! Unparalleled content in WRC: - The 5 new rallies in the 2021 calendar: Estonia, Croatia, Belgium, Greece and Spain - 6 historic rallies: Acropolis, San Remo, Germany, Argentina, Mexico and New Zealand - Over 120 special stages - 52 official teams of the 2021 season (WRC, WRC2, WRC3, Junior WRC) - 20 legendary cars, including iconic models from Alpine, Audi, Lancia, Subaru, Ford, Mitsubishi, Toyota The Career mode, widely praised as one of the deepest and most comprehensive in a racing game, has also been heavily improved and enhanced with a livery editor and the ability to create your own team and add your colours to modern cars! Using hyper-realistic and ultra-precise physics, WRC 10 further improves the driving experience through better management of aerodynamic forces, turbo and braking on all surfaces. The sound design has also been redesigned from the ground up to increase immersion. RiMS Racing is the first motorcycling simulation that combines a realistic riding challenge with engineering and mechanics! Ride the world's most powerful bikes and optimise their performance by swapping out parts and analysing data in real time. OPTIMISE YOUR BIKE With a mechanics management system never before seen in a motorcycle simulation, you can dismantle all your bike's parts to maintain them after each race or to replace them and boost your performance. You will become familiar with every last screw in your bike. Browse a catalogue of over 500 official spare parts from the biggest names in the industry along with over 200 official equipment items to personalise your rider! ANALYSE YOUR PERFORMANCE RiMS Racing thrusts you straight into the heart of the action with the Motorbike Status Check (MSC), which helps you analyse your bike's behaviour in real time and understand how to optimise your performance. Brake disc temperature, tyre pressure and wear, suspension behaviour affecting stability, electronic settings… Just like for a real rider, your bike's configuration can be adapted to your riding style! ACCURATE AND REALISTIC PHYSICS The level of accuracy and details provided by the mechanics management and MSC is matched by realistic motorcycle physics that will thrill the most demanding of track racers. But thanks to the various ride assist technologies, less experienced players can still learn the techniques that will take them to the top.