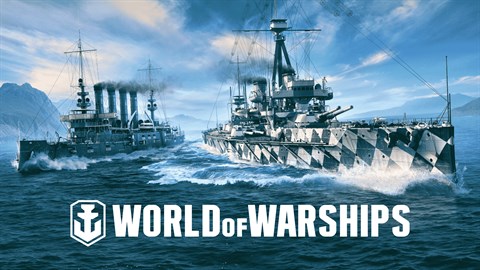 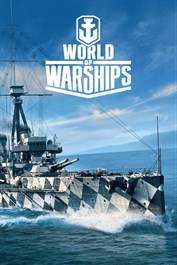 Deluxe Edition of the game includes 2 Premium ships: Dreadnought Battlecruiser and Charleston Cruiser, and 7 days of World of Warships Premium Account. World of Warships is a team-based online naval action experience that places you at the helm of the most fearsome war machines of the 20th century. Amass your own armada of legendary historical vessels and sail them into large-scale battles with other players. Once there, take advantage of a wide-ranging arsenal of imposing naval weaponry and equipment to devise cunning strategies and lead your squadron to victory on the high seas! DREADNOUGHT The first of its kind, the Royal Navy's Dreadnought revolutionized the history of shipbuilding. HMS Dreadnought far outmatched all of her predecessors in terms of size and firepower. Key features: • Ten 305 mm main guns placed in five twin turrets. Normal firing range: 13.7 km; rate of fire: 2 shots per minute • Numerous small-caliber secondary battery guns that have a high rate of fire, but a short range of only 3 km • Extra credits per battle and 50% more XP provided by the camouflage CHARLESTON Charleston is an American St. Louis-class cruiser. This large cruiser with moderate speed, a large pool of HP, and numerous main guns, is perfectly suited to causing some impressive damage in battle. Due to the above-average number of guns for her tier, the ship stands as a hazardous opponent for ships of any type. Key features: • Fourteen 152 mm guns. Standard reload time—9 seconds; firing range—12.4 km • A handsome pool of 29,500 HP • She earns more credits per battle, and has a camouflage that adds a 50% XP bonus per battle and reduces the cost of the ship's post-battle service by 10% 7 DAYS OF PREMIUM ACCOUNT Warships Premium Account offers you the following bonuses: • +65% XP per battle • +50% credits per battle • The ability to simultaneously undertake three tasks in World of Warships campaigns EPIC NAVAL COMBAT Naval warfare has never looked this good! Engage in thrilling battles between massive fleets across a multitude of gigantic maps where every maneuver, salvo, or push can mean the difference between utmost triumph and total defeat. OVER 400 HISTORICAL SHIPS From Bismarck and Yamato to Iowa and Hood… The most famous and historic warships of WWI and WWII have been recreated in breathtaking detail, making World of Warships the most extensive virtual naval museum on the planet! 4 DIFFERENT CLASSES Every playstyle has its place! Take command of devastating but slow battleships, versatile but vulnerable cruisers, stealthy but lightly-armed destroyers, or quick-striking but fragile aircraft carriers — and everything in between! REWARDING PROGRESSION Choose your favorite branch among 12 in-game nations and battle your way up a comprehensive ship tier system following a natural historical progression. UPGRADE AND CUSTOMIZE Install modifications on your ship to fit your playstyle, train your commanders to unlock special skills, and augment your fleet with camouflages, signal flags, and more. PLAY SOLO OR WITH FRIENDS If the life of a lone wolf is not for you, invite your friends to a Division and put your co-operative skills to the test! If you're looking for a real challenge, join a Clan, climb to the top of the Clan league, and strive to be the best on your server! CONSTANT ACTIVITIES World of Warships is updated every four weeks with new content — including ships, commemorative flags, special game modes, and combat missions to earn valuable in-game rewards! If you already have those ships in your Port, you will not receive any compensation for them.