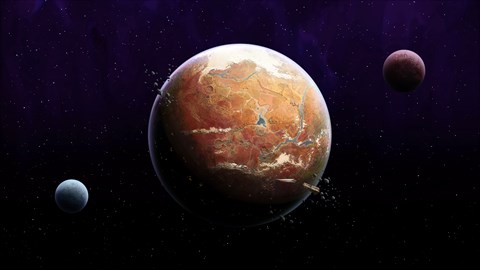 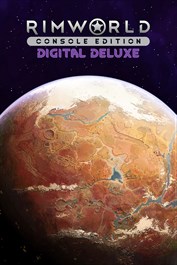 Purchase RimWorld Digital Deluxe and receive: - RimWorld Console Edition game - RimWorld Console Edition - Royalty DLC YOU BEGIN WITH THREE SURVIVORS OF A SHIPWRECK ON A DISTANT WORLD - Discover a new generated world each time you play. - Manage colonists' moods, needs, wounds, illnesses and addictions. - Build in the forest, desert, jungle, tundra, and more. - Watch colonists develop and break relationships. - Fight pirates, mad animals, and ancient killing machines. - Tame and train cute pets, productive farm animals, and deadly attack beasts. - Form caravans to complete quests, trade, fight, or migrate your whole colony. - Dig through snow, weather storms, and fight fires. - Learn to play easily with the help of an intelligent and unobtrusive AI tutor. RIMWORLD IS A STORY GENERATOR It’s designed to co-author tragic, twisted, and triumphant stories about imprisoned pirates, desperate colonists, starvation and survival. It works by controlling the “random” events that the world throws at you. Every thunderstorm, pirate raid, and travelling salesman is a card dealt into your story by the AI Storyteller. There are several storytellers to choose from. Randy Random does crazy stuff, Cassandra Classic goes for rising tension, and Phoebe Chillax likes to relax. BUILD. DEFEND. EXPLORE The game generates a whole planet from pole to equator. You choose whether to land your crash pods in a cold northern tundra, a parched desert flat, a temperate forest, or a steaming equatorial jungle. Different areas have different animals, plants, diseases, temperatures, rainfall, mineral resources, and terrain. The challenges of surviving in a disease-infested, choking jungle are very different from those in a parched desert wasteland or a frozen tundra with a two-month growing season. ENDLESS COLONIST INTERACTION Your colonists are not professional settlers – they’re crash-landed survivors from a passenger liner destroyed in orbit. You can end up with a nobleman, an accountant, and a housewife. You’ll acquire more colonists by capturing them in combat and turning them to your side. So your colony will always be a motley crew. RimWorld Console Edition - Royalty DLC is a full gameplay expansion to RimWorld Console Edition. This gameplay DLC will also be available to purchase on the full release of the game.