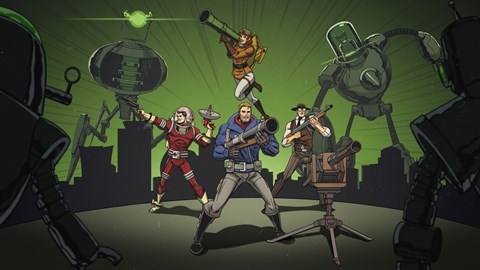 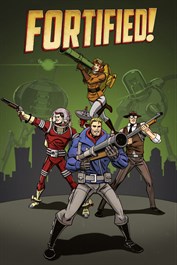 Fortified is an explosive strategy shooter where players will defend the Earth against a menacing Martian invasion in the 1950s. Play as one-of-four pulp inspired heroes as they fight swarms of terrifying robots with an arsenal of Cold War era weapons and experimental technology. Protect the city by building a network of defensive structures, commanding an army, and jumping into battle against dangerous sky scraping attackers. Fight for Earth alone or with up to four players for the ultimate co-op defence experience. Genre-Bending Gameplay – Fortified combines third-person shooter, real-time strategy, and tower defence mechanics in an exciting new way! Retro Sci-Fi Flare – Go back in time and experience an alternate history, where planet Earth is assaulted by an unstoppable Martian menace. Be immersed in a world that’s straight out of a 1950’s comic book. Construct the Ultimate Defence – Players will fortify their base by strategically building a network of defensive structures to thwart the oncoming waves of mechanical invaders. Pulp Inspired Character Classes – Fortified features four classes based on prominent pulp character archetypes, including a jetpack piloting heroine, a shotgun wielding space cowboy, a secret government agent, and a battle hardened Marine captain. Four-Player Co-Op – It can be difficult to face the Martian machines alone. Fortified offers diverse co-op gameplay that requires team coordination and strategy. There’s power in numbers, but victory only comes to those who work together.