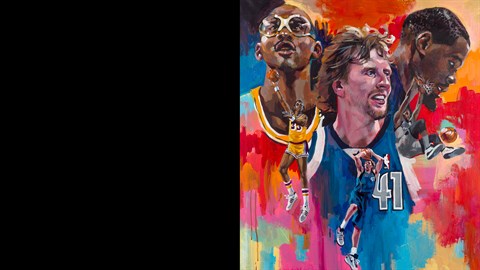 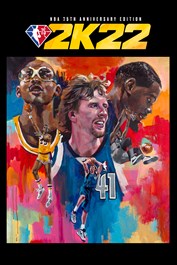 This edition includes NBA 2K22 for Xbox One and Xbox Series X|S - A New Generation NBA 2K Experience. A WORLD OF BASKETBALL NBA 2K22 puts the entire basketball universe in your hands. PLAY NOW in real NBA and WNBA environments against authentic teams and players. Build your own dream team in MyTEAM with today’s stars and yesterday’s legends. Live out your own pro journey in MyCAREER and experience your personal rise to the NBA. Flex your management skills as a powerful Executive in MyGM and MyLEAGUE. Anyone, anywhere can hoop in NBA 2K22. STEP YOUR GAME UP New tactical offense meets an overhauled defense for a more competitive and immersive NBA 2K22. Add skill-based dribbling, shooting, dunking, and alley-oops to your bag of moves, and counter them with ferocious new blocks and contests on the other end of the court. BE PART OF A HUGE HOOPS COMMUNITY Whether in the City (for Xbox Series X|S) or in the Neighborhood (for Xbox One), live out your basketball life in the biggest and most vibrant hoops community in the world. With your MyPLAYER, put in the work, rep up, and dominate the courts. You can train in the Gatorade Training Facility, pick up the latest gear at SWAG’S, and compete throughout the year in diverse Events. Be the baller you want to be in NBA 2K’s own basketball hub. YOUR DREAM TEAM Collect, craft, and hoop in the ultimate NBA fantasy competition: NBA 2K22 MyTEAM. Build your dream lineup of NBA stars and legends across any era, and explore game-changing evolutions to the MyTEAM experience – each addition introduced Season after Season. NEW SEASONS, NEW DISCOVERIES In NBA 2K22, every Season brings fresh opportunities to reap new rewards. Whether in MyTEAM or MyCAREER, compete against the best and discover what amazing rewards each new Season has in store. This edition includes: • NBA 2K22 for Xbox One • NBA 2K22 for Xbox Series X|S - A New Generation NBA 2K Experience • 100K VC • 10K MyTEAM Points • 10 MyTEAM Tokens • Sapphire Kareem Abdul-Jabbar, Dirk Nowitzki, and Kevin Durant MyTEAM Cards • 22 MyTEAM Promo Packs (Receive 10 at launch, then 3 per week for 4 weeks) • Diamond Jordan Shoe MyTEAM card • Coach Card MyTEAM Pack • 10 Boosts for each MyCAREER Skill Boost type • 10 Boosts for each Gatorade Boost type • 4 Cover Athlete T-Shirts for your MyPLAYER • MyPLAYER backpack and arm sleeve • Custom-design skateboard for MyPLAYER