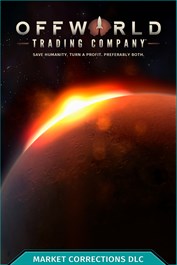 Mars used to be the place where the unwanted went. The criminals, the men and women who were a menace to society. However, a crisis on Earth forced even more humans to flee to the Red Planet in order to make better lives for themselves. Technology had failed them, and dwindling supplies was threatening to doom them. Market Corrections is a new piece of downloadable content for Offworld Trading Company that features 12 brand new maps and 3 new character campaigns that share why humanity began to colonize Mars. Reni-6: A sentient robot who has spent years serving humans, Reni-6 seeks to change humanity’s perception on robotics. By providing food and aid to the colonies, Reni-6 hopes they’ll see that not all technology is bad - in fact, it can even be helpful. Ilana Kamat: A brilliant scientist, Ilana was there when a mysterious algorithm wiped out Earth’s technology. Her mentor, Silas, is keen to make certain that the same doesn’t happen to Mars, and for the time being she’s left in charge of the company to make sure things keep operating smoothly. Frank Dawson: Frank doesn’t talk much about why he was sent to Mars - and most people are afraid enough not to ask. It is a reputation that he never asked for, one that he seeks to change for himself, as well as the rest of the colonists who first came to Mars as prisoners.