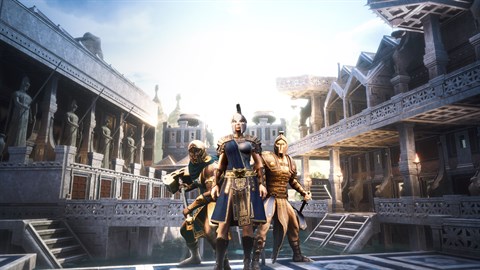 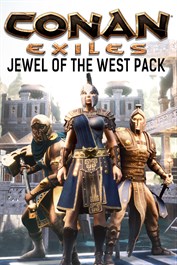 Jewel of the West Pack

The new content allows you to build exclusive new houses and settlements with a complete set of Aquilonian building pieces. Build structures sheathed in smooth marble to create a whole new look for your base. Don three new armor sets like the Aquilonian Scout light armor and wield weapons like the lion-headed Aquilonian Mace. You can also craft many new placeables like Aquilonian statues, braziers and jars and use new warpaints to change your look. Jewel of the West Pack contains: • 39 new Aquilonian building pieces. o A full set of building pieces with the same stats as existing tier three. • 15 new armor pieces in three sets, such as the Black Dragon armor. o Light, medium and heavy sets with an epic end-game version of each. • 9 new weapons in one Aquilonian weapon set. o Same power as iron weapons with an epic end-game version of each weapon. • 5 new Aquilonian warpaints. o Decorative warpaints symbolizing for example rule and bravery. • 25 new placeables, such as the harp and councilor chair. o Craft them at the new Aquilonian Artisan table. All the new content from Aquilonia is exclusive to this DLC and adds a host of new visual options but does not give any in-game advantage in power. All the new items have comparable stats to existing items.